The Game “Sunboi”,  is a small farming/adventure game where you play as a sheep, which is planting and harvesting flowers, to buy a spaceship and get away from its current situation.

The danger is that during night wolves come out of the woods to steal your money. During the day you need to work efficient to make progress. But watch out and don’t be outside to late.

Hello team which have created this great game :)

I'm here again after your update with my letsplays of your game :)

I like that you have changed font, it becomes more readable, even tho i don't think that it's still readable enough. You have implemented interesting flower economy system, i appreciate smaller numbers but on the other hand it's kind of confusing at first, especially with pink/purple color which is also too close to red. I found it strange, that you lose half of money and all seeds except red ones after successful day. Also it's strange to have hidden mechanic when i get certain amount of all seeds if i have more than 14 red seeds if i caught it correctly. Can you explain it for me? Or this is a secret intentionally?

Other than that i like how you changed level design, so it's more convincing to explore whole level and it makes system which considers risk and give reward according to it. Cool that you have polished other aspects for example menu, day screen and etc. And ending ofc is cute :)

Hope to see more updates on the game! I will try to catch any major update

Unfortunately, in videos above i was playing on version which you had here about 3-4 days ago and not current one, can you tell me what's the difference? At a glance i didn't see big changes but mb i'm missing something

Thanks for your feedback!

I'm very glad that you've tested the update. (Still gotta watch that video today.) You're totally right about the font and the price colours, we gotta change them. The issue with the seeds is probably a bug, but I don't know where it comes from. The mechanic with your money and seeds being cut in half every night is intentional to make the players work hard, stay up at night and to force them to play the game the way we intended.(A friend of ours always bought like 10 flowers a day, went home as soon as the night had begun, most important of all, he didn't meet any wolves and said that the game was boring. We wanted to prevent players from playing in that way by punishing them if they do so) But I don't know if that's the right way to do it. If you have any suggestions, we'd be very happy to hear them.

Also, you lose half of every flower, also red but you always get 10 red flowers right after that.

Thanks for your constant support an feedback on the game , it's very constructive :D. The newest update just added a small pause screen if you click escape and some coin pickups if you harvest the flowers. So now you don't instantly get the money, but you have to collect it from the ground.

We will probably still fix some small bugs and tweak some things but after that  we also wanted to leave the game maker version of this game be and try building it in unity (cuz Unity has better systems for porting games, making classes, shaders etc.) but that's probably gonna take a long time and I'm not sure, when we will even start with that.

Hi, sorry for late reply, i was really conflicted about your unity situation because i'm unity programmer myself and was thinking about helping you but i could not decide. Now i guess i can't actually do this, but mb in the future if you want any help of course

About seed cutting on in night - ye, i understand your point and i can agree, i was playing a lot not seeing wolves for a while but i was enjoying it anyway :) But that's a big part of the game so i guess it's ok to force playing at night. The only issue here imho that this is not transparent (at version i was playing)

How is it going tho? Are you working on this project now?

Hi, thanks for the comment. We stopped working on the game, since we almost alway stick to making short gamejam games. Up until now every gam that we worked on for more than a month just became too complicated and abbandoned. In the meantime we've already made a new jam game, but it was so buggy and unfinished that we took it down from the site after the jam ended. I am working on remaking that game right now, but as a team we only really make small jam games. We sometimes think of remaking our jam games but to be honest, none of the ideas would make for an actual commercial project. So for now we'll probably stick to jams. Thanks for the offer of helping though. What I wanted to ask is how you've been doing.

Sorry for late reply again, for some reason it's difficult to do it right away but it is always in back of my mind :)

That's sad, i would like to have this one complete, but it's fine if you are looking for more solid game idea

Right now i'm actually employed at gamedev as unity programmer, but it's been only two weeks so it can go either way. Before that i was focusing more on udemy courses than on jams, unfourtanately could not find more advanced stuff there, was thinking about other sources or just working on pet projects :)

Hey, that's really cool, I hope that you're having fun at work and that even if things don't work out you keep making games if it's something that you love doing.
Yeah, I feel like many Unity Tutorials are kinda bad (I only know some from YouTube), but whenever I try to start with a Unity Platformer, they always use a Rigidbody2D and the movement always ends up being really clunky (that's why I'm kinda sticking to GameMaker rn). So I totally get your point of focusing on small projects rather than tutorials.
Anyways, have a good one!

This game is beatifully designed and has it's own artstyle. I like the topic and the animations and the day night system. The game gets harder and harder the more plants u have to plant to get more money. 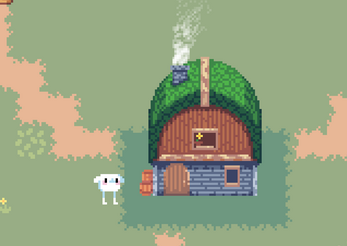 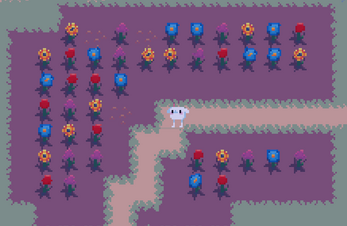 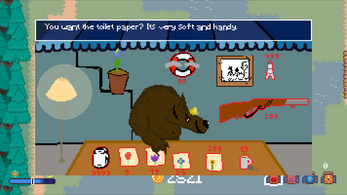